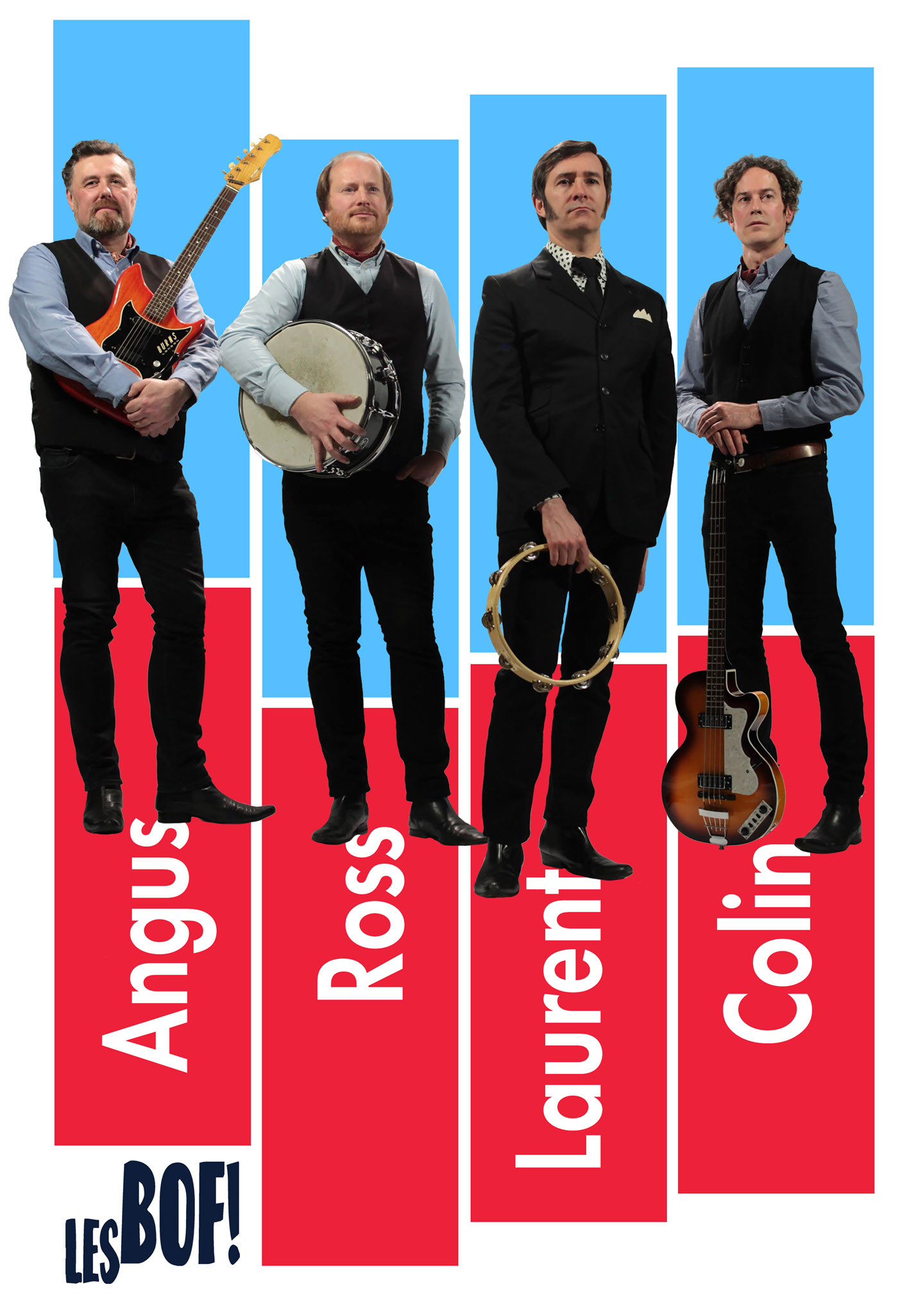 “les BOF! are Scotland’s answer to the perennial question that quite possibly no-one ever asked. 60s French yé-yé garage, served up with panache by venerable Scottish fuzz beat Rock n’ Roll emissaries. Their sound brings with it a certain… ‘je ne sais quoi’ - a fusion if you will, of unique, rarefied and aged elements of the garage beat scene, these chaps have been elegantly blended together from the likes of ‘The Thanes,’ ‘The No-Things,’ ‘The Sensation Seekers’ and ‘Preston Pfanz & the Seaton Sands.’

But who are these fellows I hear you ask..?

Ross – the drummer who draws together the sophistication of the Highlands, with a gentle, sweet borders nuttiness.

Angus – a guitarist whose robustly flavoured sound is complemented by a smooth dry finish, matured well beyond the standard edition age.

Laurent – the chanter exceptional, both light and fruity with a suggestion of lime and a slight woodiness.

Following the release of their debut album ‘Nous Sommes les Bof!’ (Copase Disques) the band have taken their sound both down and back up the British Isles and across the seas to their beloved European continent. Appearing on many an occasion at festivals such as Beatwave, Primitive, Gutterball, Festival Beat and Purple Weekend to name but a few. 2018 saw a vintage year for the boys, with a memorable tour of some of Canada and America’s rowdiest east-coast haunts (featuring a live session on WFMU).

After doing the rounds with all their other noisy vehicles, les BOF! returned home to distil the sounds that had lay for some time in the cool, dusky corners of guitarist Angus McPake’s home-built ‘Ravencraig’ studio, a place where frugally almost none of the angel’s share is knowingly lost. Of course, whilst the exact secrets of its production are only known to the Master distiller himself, the rumble and twang, the boom, the tonk and the ping are clearly expressed here for your delight and delectation.

But yes dear reader, quite right you are, to truly open up these flavours, one should add a little Dirty Water. This 2019 release will surely help to further the reputation of any connoisseur’s collection with the finest that France, Scotland & Ireland have to offer. Mais oui, mes amies… les BOF! are back on the scene and ready to share with you a little something of their latest long player: Voila!"

i want a website like this
Ucraft is a free website builder that provides web designers, marketers and business owners with a set of web design tools to start their next awesome project in minutes. No coding or designer skills needed. Go to Ucraft